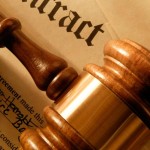 New information collected by the prosecution linking indicted Brooklyn Justice Gerald P. Garson to a bribery scheme emerged during a three-hour argument yesterday on defense motions to dismiss the case against him and suppress wiretap evidence.

The material centered mainly on conversations, either recorded or reported by a prosecution witness, indicating there was contact between Justice Garson and a businessman who was repeatedly recorded as claiming he could fix divorce cases handled by the judge.

The witness said that she had seen Justice Garson’s name and telephone number in the electronic phone book of a cell phone belonging to businessman Nissam Elmann. The prosecution, however, conceded that it had been unable to verify another claim made by the witness regarding a three-way conversation with the judge.

Justice Garson’s lawyer, Ronald P. Fischetti, heatedly denied that his client knows Mr. Elmann, one of eight people charged with participating in a scheme to influence the judge. Mr. Fischetti said Justice Garson “never received a dime” from Mr. Elmann, nor had the prosecution made any charge to that effect.

Justice Garson was indicted last April on official misconduct charges. He is accused of having given a lawyer who frequently appeared before him ex parte advice and other amenities, such as favored access to chambers, in exchange for free meals, drinks and, in one instance, a box of cigars.

Justice Garson was also accused of accepting referral fees from the lawyer, Paul Siminovsky, who appeared before him as counsel to parties involved in divorce cases. In many cases, Justice Garson appointed Mr. Siminovsky as a law guardian to represent children caught in the midst of bitter divorce proceedings between their parents.

In August, the prosecution obtained a superseding indictment against Justice Garson and upgraded the charges against him to bribery. The bribery charge, which is punishable by a maximum sentence of 2 1/3 to 7 years in prison, accused the judge of giving Mr. Siminovsky appointments as a law guardian worth tens of thousands of dollars in exchange for gifts such as meals and drinks worth thousands of dollars.

Charges have been dropped against Mr. Siminovsky. He has been cooperating with the prosecution.

In addition to Justice Garson and Mr. Elmann, the other defendants remaining in the case are Louis Salerno, a court officer; Paul Sarnell, a former court clerk; and Avraham Levi, a litigant in a case before Justice Garson.

Two other defendants, Esther Weitzer and Rabbi Ezra Zifrani, have pleaded guilty and are cooperating with the prosecution.

The information about Justice Garson’s phone numbers being in Mr. Elmann’s cell phone was disclosed by Executive Assistant District Attorney Christopher P. Blank, as he fended off defense claims that the prosecution did not have probable cause for a series of wiretap warrants obtained during the investigation.

Mr. Blank said that Frieda Hanimov, who first alerted the Brooklyn District Attorney’s Office to a possible bribery scheme in the fall of 2003, told investigators that Mr. Elmann had shown his cell phone to her with the name and number of Justice Garson displayed.

Mr. Blank also said that 16 phone calls had been uncovered that were made from either Justice Garson’s robing room or the courtroom at 210 Joralemon Street to Mr. Elmann’s business.