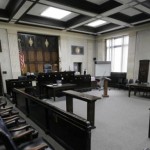 As a panel of reporters, lawyers and judges gathered at Columbia University on Tuesday to debate what could be done to prevent what was referred to as “Tyco II,” a federal judge in Manhattan offered the first real answer: Bar the press from reporting the names of jurors.

The judge, Southern District Judge Richard Owen, who is presiding over the re-trial of former investment banker Frank P. Quattrone, said at the outset of jury selection that he would make it “absolutely clear” that the media was not to publish the names of jurors until the trial ended.

When told by a federal prosecutor that “the press may have an issue with that,” Judge Owen responded, according to a transcript, “Then I’ll let them have an issue with that. I do not want a Tyco front-page picture or that kind of thing, and then people calling the juror at home or whatever happened in that case.”

Owen was, of course, referring to the courtroom drama surrounding Ruth B. Jordan, a 79-year-old juror who was not convinced that Tyco executives had acted criminally in what prosecutors alleged was a scheme to loot the company’s assets.

Jordan was identified in The Wall Street Journal and the New York Post after some reporters claimed she flashed an “OK” sign to the defendants during deliberations. She later became frightened by a letter she received about the case from a man in Massachusetts, and the six-month trial was called off by Supreme Court Justice Michael J. Obus.

The mistrial set off a debate over what, if anything, should be done to keep jurors’ names out of the press until a verdict is handed down or a hung jury declared. Owen’s response, the first in a courtroom setting, struck media organizations and their lawyers as unduly harsh.

“The effort to protect prospective jurors by enjoining the press from publishing information that they learn in court is plainly inappropriate,” said David A. Schulz of Levine Sullivan Koch & Schulz, who successfully represented news organizations in their effort to invalidate a ruling from Southern District Judge Miriam Goldman Cedarbaum that closed jury voir dire during the Martha Stewart trial. Schulz Wednesday sent a letter to Owen asking him to rescind his order. After a hearing Wednesday, the judge declined.

“There is a long tradition of reporters sitting in voir dire and not publishing names,” Schulz said. “What happened in the Tyco case was an extraordinary aberration, and there is no reason to think that it would happen again.”

Schulz, who participated in the Fair Trial, Free Press annual conference at Columbia before learning about Owen’s remarks, said Wednesday that the legal community needed to take a deep breath and let Tyco pass.

Other members of the panel, however — along with attorneys and judges who were interviewed in the last week — expressed varied views on how judges should police their courts in light of Tyco, or whether state and federal legislators should join the discussion.

After a morning debating a hypothetical that pitted the press’ interests against those of law enforcement agencies, Chief Judge Judith S. Kaye, who presided over the discussion, turned everyone’s attention to the two words she said were on everyone’s mind: “Ty Co.”

Southern District Judge Richard M. Berman threw out the possibility that juror anonymity could be the subject of a court order, with violators subject to contempt of court.

Eastern District Judge Frederic Block took the view that Tyco was an anomaly, and that judges would be better off talking to prospective jurors about what normally happens at trials to quell any concerns. And as far as the reporters themselves, Howard Levine, a retired State Court of Appeals judge, said, “The solution to these kinds of things is peer pressure.”

Rex Smith, editor of the Albany Times Union, noted that media outlets had already begun to criticize each other and themselves for aspects of the Tyco coverage, from the naming of Jordan to the reporting of anonymous remarks about her failure to tip doormen at her building. “I think this was viewed by a lot of people as having gone too far,” he said.

David Bookstaver, director of communications for the Office of Court Administration, said that in the near future judges could take administrative actions that would help hide the identity of jurors. “I think we’ll see more sealing of voir dire minutes.” Those minutes have been used by reporters not present at voir dire to obtain the names of potential jurors.

And in the future, specific recommendations may come for the Commission on the Jury, which was appointed by Judge Kaye to improve the jury system. “What we’ve seen in the Tyco case gives me great concern,” said the chair of the commission, Mark C. Zauderer of Piper Rudnick. “I am prepared to delay our first report to be sure that we look at this important issue.”

Whether laws are changed or all parties simply agree to behave, there are several inherent powers that attorneys say federal and state judges may consider to protect jurors.

“I think if you had a high-profile case that’s covered in the press you would certainly think about sequestration now, where as in the last year you wouldn’t have thought about it much,” said Acting Supreme Court Justice John A.K. Bradley.

Until May 2001, sequestration was mandatory during deliberations of class A, B and C violent felonies in New York. But the practice was abolished through legislation after being criticized for years by Judge Kaye as costly and burdensome for jurors.

Mike Pearl, a retired New York Post reporter who wrote about courts for 31 years, said the Tyco trial showed that “there was a reason why for more than a century jurors were sequestered.”

“Sequestering a jury is expensive to do, but when you have a six-month trial you want to protect it,” Pearl said. “The Wall Street Journal and the Post shouldn’t have mentioned her name, but once they did the judge should have done something about it.”

Brooklyn Supreme Court Justice John M. Leventhal said a return, at least in part, to sequestration could have its benefits, but would have shortcomings, too.

“I think in certain cases sequestration would probably promote continued deliberations and quicker verdicts, whatever they might be,” Judge Leventhal said. “But I also understand and admire Judge Kaye’s position that you want to make this as citizen friendly as possible. It’s a tough call.” Without sequestration, he said, “We have fewer people who are opting off. It increases the jury pool tremendously. People have elderly parents, they have children.”

Brooklyn Supreme Court Justice Abraham G. Gerges, the former president of the State Supreme Court Justices Association, said the chief thing to remember is that Tyco was a rare event, and that judges can head off most problems by communicating with jurors, attorneys and the press.

“You don’t have to change the rules, but you have to be very alert in these instances,” Judge Gerges said, adding that he has had only three or four mistrials in 13 years on the bench. “You have to have a responsible press. I try to speak to the press on a regular basis.” At the same time, the judge said, “There is no way to innovate if a juror screams out, ‘He’s not guilty!'”

Alan Vinegrad, a partner at Covington & Burling and the former U.S. Attorney for the Eastern District, said federal courts are better equipped to protect juries than state courts, owing to rules that allow anonymous juries in some cases and support verdicts by only 11 jurors in rare instances.

“I think something has to change in state law to empower judges to be able to preserve the integrity of the jury in a way that will not prejudice the rights of the defendant,” Vinegrad said.

Ronald P. Fischetti, who has handled numerous high-profile cases, said the state should adopt the federal rules or somehow formalize the tradition reporters had followed before Tyco. “Jurors names, while given to all counsel, should not be given to someone else,” he said.

However, Fischetti said relying on an anonymous jury or sequestration was problematic, since the former implies that the defendants are dangerous people and the latter puts jurors in the hands of law enforcement officials, with whom they might develop a bond.

Schulz said he is no advocate of judges devising ways to withhold information from the press, as the 2nd U.S. Circuit Court of Appeals suggested Judge Cedarbaum could have done in Stewart’s trial, rather than conduct voir dire in private. However, he said, this approach is preferable to a prior restraint.

“If things need to be done to protect juror privacy or restrict certain types of information, the approach that should be taken is on controlling information that is released to the press,” he said.

The debate, undoubtedly, will continue, though one prominent defense attorney, Gerald L. Shargel, said he hoped it would end soon.

“In my view we can live with this problem,” he said. “That’s the price you pay for having a jury system. Every time there’s a perception that something went wrong, then the crowds roar and say let’s make new laws, let’s change this. We’re doing fine with the laws we have.”